Poster distribution. Accounts for, over 65% of ticket sales and attendance according to recent research. Rather than, other more expensive forms of media advertising.

The repetitive exposure of an event’s poster advertising when distributed by a professional distribution company. Creates, a hype and excitement. Unequaled, by any other advertising.

We provide, free leaflet distribution with our poster campaigns. Our research shows, discounts on these leaflets can seriously help your events ticket sales, attendance and success.

With over, 35 years experience in the events and entertainment. A-Z Poster Distribution, are the market leaders in providing high impact poster campaigns for events all over the UK and Ireland.

We can, put up posters for any event or product

Posters, used to advertise almost any event or product. We love new and varied products so get in touch and to see what we can do for you.

We love advertising festivals. Get in touch to see how we can help.

We are, the recognised leaders in funfair poster campaigns.

We have a great team to do all your theatre postering

Get in touch to get your circus billed the way it needs to be.

We are, the proud and sole supplier of poster Distribution to London’s premier funfair provider Irvin Leisure . Spreading the word to keep London’s families entertained.

Our founders relationship with George Irvin’s Funfair goes back a long way.

Back in 1990’s, two fairground families excelled at the poster distribution for their respective events. Irvin’s, who have been in the industry since the 19th century. And new upstart John Carter with his now famous Carters Steam fair. John Carter was an excellent show promoter and experienced billposter.

Everywhere, either families events went the towns would be filled with posters. Sometimes, their poster campaigns would overlap. Often, this would cause tension between the respective families! This is because of, the nature of the amusement business. And, the close proximity of these respective events mainly in London. However, over the years this grew into a mutual respect.

John Carter died in 2000. His step son and our boss Zed Lawrence was already by then totally in charge of all the advance publicity for Carters Steam Fair. He, continued to hone his skills with increasing inventive poster advertising techniques. Because of this, In 2009 Zed decided he wanted to concentrate solely on poster distribution.

So, in 2010 started Monkey-fly Advance Publicity, later to be renamed A-Z Poster distribution. In the early years A-Z Poster Distribution grew by putting up posters for the majority of the funfairs around the South of England. Including George Irvin’s. Until, in 2018 we signed a exclusive deal to only advertise their funfairs. While expanding the business in to poster campaigns for different events like circuses, festivals and other events. 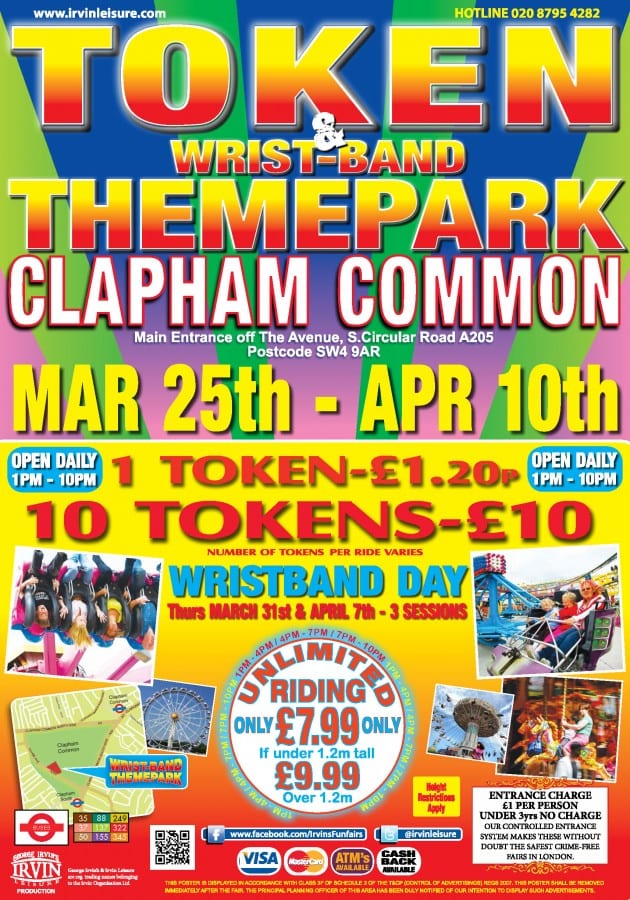 A-Z Poster Distribution are proud, to provide most of the poster campaigns for the this amazing circus….Circus Zyair present an amazing, colourful and action packed hour and a half show with high energy acts from all over the world. Providing, a dazzling combination of circus, music and laughter. With a heated big top, comfy seating and an electric atmosphere from start to finish Circus Zyair promises to be a truly magical experience for the whole family. Look out for the posters!

Poster Distribution..The most effective way of advertising an event

Poster distribution. By far, the most cost effective way of advertising events. Research shows, over 65% of the attendance comes directly from the poster campaign. With the remainder coming from more expensive forms of advertising. Because of this, our regular clients wouldn’t consider promoting an event without a poster campaign. Our experienced team at A-Z Poster Distribution work directly with clients to understand the target demographic for each event. By doing this, we provide a bespoke poster campaign for every event we advertise.

Well designed posters. Make, a world of difference to the success of your event. The design of the events poster is often intentionally cryptic. Sometimes, Poster campaigns use poster designs are simple. large letters may be chosen to give maximum impact. More often than not, it is about getting a good balance of style and impact. Keeping, the main points highly visible the most important part of poster design.

The title, advertising slogan for the poster campaign are important. Also, the date and the event’s venue. These, are important bits of information that should be instantly visible on your poster. Keeping the information on the events poster to a bare minimum helps to reduce clutter. If using more than a few words on your poster it’s best to use both capital and lower case lettering. Capitals on the poster are best used for emphasis or to attract attention. Lettering should be correctly spaced so it is easy to read. Posters are often seen from distance so the right colours are important to draw you in

Other considerations for your poster campaign

Think about, what your poster will look like behind glass. Because, posters will often be placed in shop windows. Also, primary colours can be seen easily. However, light colours are usually not very good in poster design. Because, the text is harder to see unless a dark contrasting background is used. Therefore, the text on the posters should always have enough contrast to make it stand out.

When designing the poster for your poster campaign. You should, also consider everything else that will be in shop windows. Simply put, your poster design needs to stand out from the crowd.

If possible, try to include QR codes on the poster with links to a facebook page or website for the event. Please read our article about this here.

A-Z Poster Distribution view the success of our clients events as our own and have a long list of clients that would expect nothing less…we take it very personally from start to finish.

How Come We Know About Poster Distribution?

Taking, great care in training our poster distributors to be very polite but also respectfully persistent. This ensures a high success rate in getting permission to display posters. Our staff are trained to display posters in the most prominent and effective spot possible. Ensuring the event’s poster goes up and is not left for the shop keeper to put up themselves. (In our experience, posters left behind rarely get displayed by the shopkeeper!).

All of our billposters, have extensive on the job training. Learning, poster advertising techniques under an experienced manager and working alongside more experienced poster distributors. We are particularly careful in selecting our poster distributors, they need to be very polite but also very confident and persistent. This ensures, a very high success rate getting posters displayed!

We believe, our poster distributors are not only distributing and displaying posters. But, are an integral part of the PR of the event. Hence, we train our staff to interact with the general public in a positive manner whilst promoting your event. 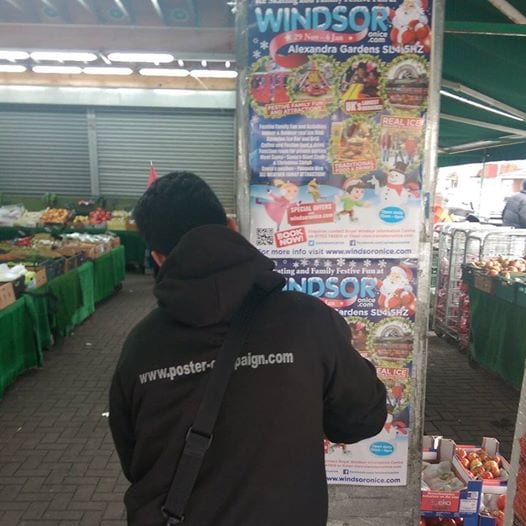 As a poster distributor, your main job will involve going from shop to shop. Asking, shopkeepers permission to display posters and leaflets in their shop, cafe, pub etc etc. In order to, promote and advertise upcoming events to the general public. As, a poster distributor you will be work as part of a team. You will, receive full on the job poster distribution training in every aspect of the job. And, work alongside more experienced poster distributors.

Being, a poster distributor (billposter or biller for short). Is a, great way to see the U.K. It can also, be a lot of fun. While, working in a small friendly team you will get to work in lots of different locations every day. While, meeting a wide and varied selection of people. Because of this, many poster distributors fall in love with the job and choose it as a lifelong career choice!

Poster distribution, can involve early starts and long drives travelling to different working locations from day to day. Also, the job can be mentally and physically demanding. Because, it involves lots of walking from shop to shop. And, talking to hundreds of shopkeepers everyday. Often, poster distributors will come across rude and difficult shopkeepers. Hence, this can be difficult to deal with and still keep a smile on your face for the next shop!

Generally, our poster distributors use professional maps to locate all the areas with shops and outlets. In our experience, this blanket coverage with the poster advertising is the best way to advertise an event to everyone in the target area.